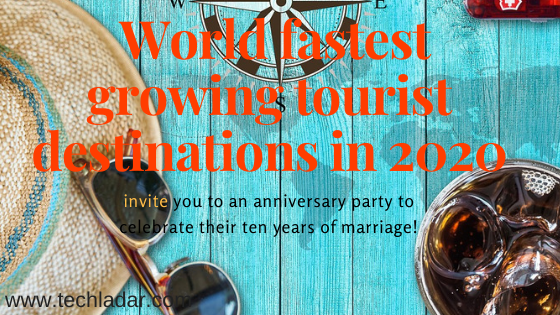 Tourism is the only industry for every State always makes an exponential rise.  Few countries which are growing on higher rate in the year 2017 are as follows:

In recent year as par the survey Palestine has witnessed a 57.8% rise in international tourist flow. The opening of Banksys boutique hotel in Palestine sweat bank is what has brought in the sudden boom in tourism. Also, the and the designation of Hebron’s old city as a Unesco World Heritage Site has added to its tourism increment.

51% is the sudden hike as far tourism in Egypt is concerned making it second in the list. Improved security and promotional initiatives is what made the increase in its tourism. The blend of ancient and modern is reflected in every sight of Egypt making it tourism grow. Visit the Sharm El Sheikh and Hurghada for sun, sea and sand experience, open air museum named luxor are named few destination of tourist interest.

Even though a small hidden island of US, still has not stopped it from being the third in list with a tourism hike of 37.3%. The swaying palms with fine grained beaches, clear water and mountains has made an escape gateway for masses.

Even though the dropping temperatures is what restricts visit to this place, yet it has seen a sudden rise of about 34.9% tourist. The series of “Game of thrones” fever has been one of the factors for this sudden rise of travellers to Iceland. Its wild landscapes, waterfalls, glaciers and thermal lagoons is what is the boom among tourists travelling here. The very famous Northern lights is also another reason drawing in a lot of tourists from across the globe.

Having the similar fear fate of terrorism as of Egypt, yet has seen a boom in tourism of about 32.5%.Tunis Medina, El DjemAmphitheatre and the southern island of Djerba, combined with extensive beaches and low prices and provided security is maintained is what is bringing in tourist from all over.

South Americas fastest growing tourist destination with an increase of about 30.2%. Being a picturesque and culturally sophisticated destination making it a tourist booming destination.Colonia del Sacramento, colonial city is declared UNESCO world heritage site, mind boggling beaches and its food are named few reasons for flocking tourists to Uruguay.

Deep hidden is isolation has recently seen a steep rise in tourism of about 28.3 %. Desert hopping, stay in Ger otherwise called huts, eagle hunting and horseback riding are what makes Mongolia back as tourist destination world acclaimed.

Last but not the least is Israel in the list sharing the same non-harmonious history as Palestine, yet booming in its tourism of about 25.1%. Tel Aviv the coolest city, Dead sea, diverse scenery and the religious city of Jerusalem is what makes Israel another fast-growing tourist destination.

What is you tourist destination for your next holiday?

2020-02-16
Previous Post: Must to carry things for every traveller
Next Post: Best make-life easy Android Apps of 2020