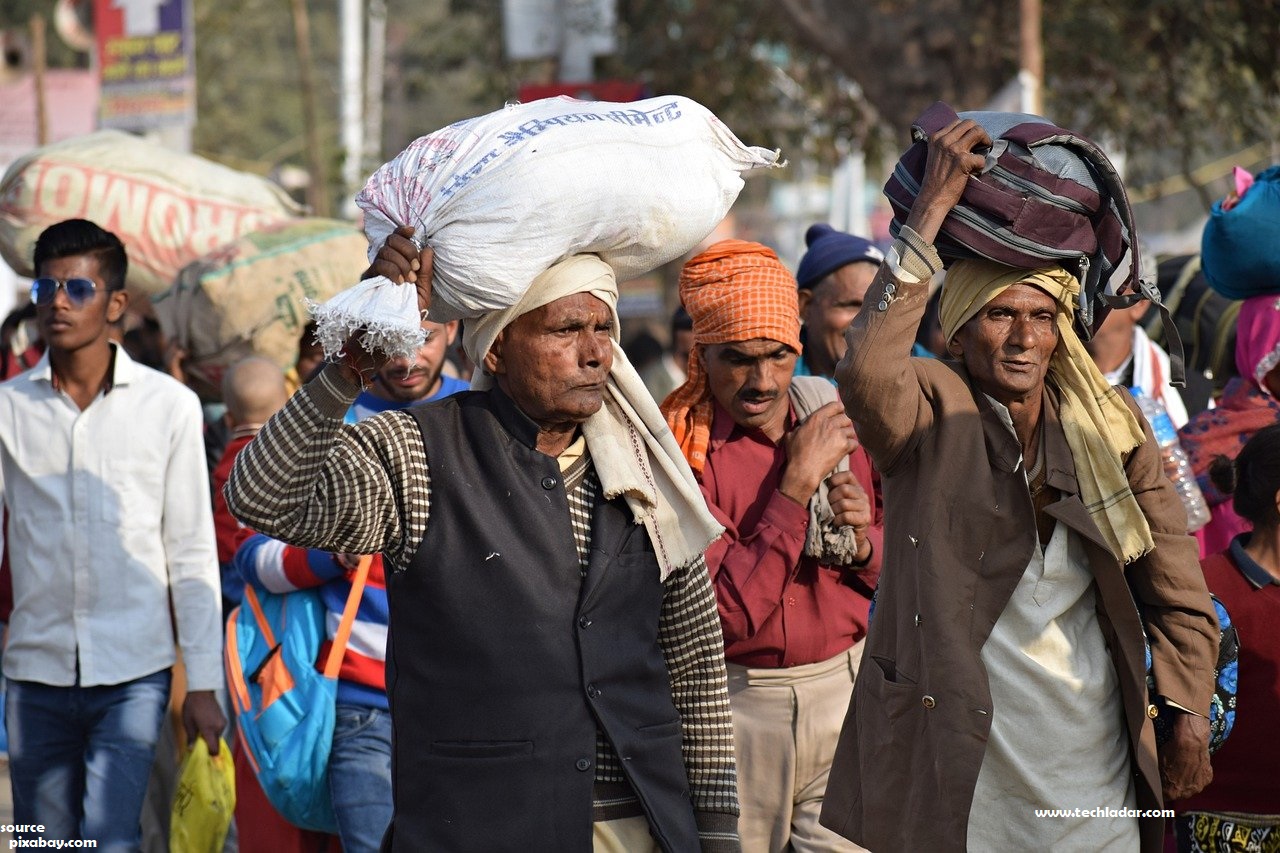 Migrant Workers In India and the COVID 19 lockdown

In: News, Social
Spread the love

financial capital of India, a decade ago, with their dreams of a brighter future. They knew that Mumbai offers better opportunities. Apart from an eight-hour factory shift and selling snacks, Rajan used his savings and a bank loan to buy a tuk-tuk. It was 24th of March 2020, when the Government of India imposed the nationwide lockdown limiting movement of the entire 1.3 billion population, with a short notice of one week. It was placed when the confirmed positive COVID cases were approx. 500. Rajan used up most of their savings to pay rent, repay the loan, and buy groceries. Upon lockdown being extended and getting out of money and options, they decided to return to their village in Jaunpur district in Uttar Pradesh. They applied for tickets on the special trains but had no luck for a week, that’s when they undertook a 1,500-Km long journey in their Tuk-Tuk.

It was early hours of 12th May – just 200 km from their village – a truck rammed into the Tuk-Tuk from behind. Sanju and Nandini died on the spot. Rajan and Nitin escaped with minor injuries. At any other point in time, this would have been an extreme episode or anomaly. But not today, when there have been far too many reports and disturbing images of migrants desperately seeking to return home. The term ‘Migration’ is not new for the country, but the realization of dependence on the migrant workforce in the development process is certainly new for many. This article looks particularly at the impact of the pandemic and resultant lockdown on migrant workers, the most deprived of the rural society in India.

The Census 2011 pegs, the total number of internal migrants in the country at a staggering 139 million, and they have been the worst sufferers. Immediate concerns of them relate to food, shelter, healthcare, fear of getting infected or spreading the infection, loss of wages, concerns about the family, anxiety, and fear. Sometimes, they also face harassment and negative reactions of the local community. Many of them have been stranded in the cities and workplaces without money and wages. All this calls for strong social protection.

A leading consultancy in India recently conducted a survey in 10 states, on 18000 people. The results show that on average poor households lost 60 percent of their income in April,

20 percent have already run out of all money and a further 60 percent will run out within the next two or three weeks. This is shocking for a country that runs on migrant laborers. The Indian statistical datasets have been inefficient in capturing the actual extent of circular migration. The data which has been put forward by the states, the Ministry of Labour and Employment, the Solicitor General, and other government officials are not in sync with each other. Therefore, the estimations of the migrant workforce have largely remained under-reported.

Fortunately, the central government acted very wisely in implementing a nationwide lockdown when the number of cases was relatively less. It seems to have an effect on lowering the spread of the disease. The Rs. 20 lakh crore package, which is around 10% of India’s GDP, announced by the finance minister under the ‘Atma Nirbhar Bharat Abhiyan’ in the month of May, aimed to rescue a struggling economy.

In the second tranche, it promises to supply 5 kg of food grain per person and 1 kg Channa per family per month for two months, for those migrants who are neither beneficiaries of the National Food Security Act (2013), or NFSA, nor possess State cards. It also includes provision for ‘One nation, One ration card’, rental accommodation under PPP, ‘MUDRA Shishu’ loan and credit facilities to small farmers.

Despite the package covering all major spheres, the Economists and groups of Financial Experts have criticized it and have expressed their disappointments because of the package being too liquidity centric and the actual government expenditure in the Atmanirbhar Bharat Abhiyan being merely 1% of the GDP and the rest just the repackaging and appropriation of liquidity measures announced by the RBI.

According to an assessment by Prof N R Bhanumurthy of the National Institute of Public Finance and Policy (NIPFP) and published by National Council of Applied Economic Research (NCAER), the way things are going, India’s Gross Value Added (GVA) will contract by a whopping 13% under the base case scenario. The base case scenario is a scenario where the government brings down its expenditure in line with the falling revenues to maintain its fiscal deficit. It also estimates if the government spends 3% of the GDP over and above what it promised to do in the union budget of 2020-21, will the Indian Economy stay in the positive territory. Short of that, the economy will contract.

Right from the start, the fight against COVID-19 has suffered from the invisiblizing of the poor. When the social distancing was made a central norm of the campaign, the impossibility of it in slums was overlooked, when it was asked to light the ‘diyas’ and beat ‘thalis’ from the balconies, the PM forgot that the poor don’t have balconies. Worst of all was the lack of anticipation that without work, without savings, the migrants would want and attempt to rush back to their hometowns.

Now as they are returning, it will create extra pressure on the agricultural sector because of the excess labor in the rural areas. The agricultural sector cannot absorb all that labor and that is where the government has acknowledged the importance of Mahatma Gandhi National Rural Employment Guarantee Act (MGNREGA) and has provided the livelihoods and wages to the huge number of returning migrants. In such tough times when the trust of the people has been eroded massively and the migrants have this perception that this is an ‘urban disease’ and is primarily spreading in urban areas, so they can escape it if they go to the rural areas, shows a lack of communication and a need for a consistent and systematic mechanism for the same. The situation is dynamic, we need the consolidation of data, we need various research groups and government bodies to come together so as to contribute to the policymaking.

The Anganwadi centers in villages must extend their services to all households, even to those who are not registered as they migrated. Similarly, the sates must establish local quarantine facilities at each city and village and should be prepared for future outbreaks (if any) also it must ensure the continuance of other health services such as immunization and maternal health care needs.

Proper decentralization at various levels is required to have a better implementation of the measures announced by the government. Recognition of the circular migration and the huge role it plays in the country’s development, which has been overdue for a long time, should be given. This pandemic is an extraordinary emergency that requires extraordinary measures to safeguard the interest of people.